I decided to join an Ultimate Frisbee league this Spring so I could get in shape and be trekkable (which means: ready to trek at any given notice and what I consider my peak physical condition). I've always been pretty mediocre at Ultimate; decent at catching and defense but not as talented when it comes to tossing or hucking (ooooo, fancy Ultimate vocabulary).

My quick and dirty Ultimate history recap goes like this: I learned how to play Ultimate in an undergraduate physical education course. Then I joined a league during a difficult summer in Alberquerque NM where the team became my saving grace. Then a short-lived experience in a Berkeley CA league where one day I tried to catch the disc, it smashed into the bridge of my nose and I exploded blood and embarrasment everywhere.

Ultimate in NYC turned out to be a pretty disappointing experience. The majority of my teammates were unrelatable* (supporting gentrification, using inappropriate slang about women and people of color, happily marketing big pharmeceuticals, etc) and the field was located a hefty 20 minute walk from any train. Plus, it was on Friday nights which, turns out, are evenings when people want to do things.

This NYC league required at least two women on the field during play and that meant that at lot people were confused when I was one of those women. Most of the other women understood what I was, but oblivious men would try and guard me aggressively as if they were making up for (what they understood to be) the unfairness of me guarding their female teammates.

I saw this confusion turn into mean-spirited frustration during the last game of the season this past Friday. I was guarding a girl whose temper was short - and she was especially unhappy to be losing to my pretty pathetic but more skilled team. There's a pass to her in the end zone and we both go up for the disc. Neither of us catch it and as she runs away she does this weird, unnecessary, angry-helicopter move and smacks me in my chest with her open hand. All the air in my lungs is gone and I'm on the ground attempting to breathe anyways. She looks at me with 0% concern as she continues down the field. Her teammate who caught the scene says: "Looks like he got in the way of your hand."

A perfect end to a perfect season. THANKS! 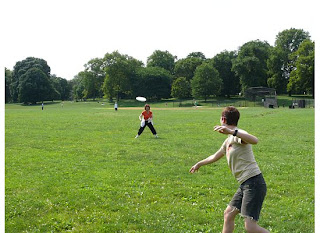 *To be fair, there were a few people that were totally rad and to them, if they are reading this blog somehow, I apologize for the generalization.
Posted by Served Cold at 8:45 AM No comments:

My first birthday in New York City was a pile of horrible disasters. All I wanted was to go dancing and I did the stupidest thing ever: had high expectations. Since I was new to the city I looked up some places on the internet. A crew of a lovely people showed up at my apartment and we set off to the East Village to find music and people moving to it. Big surprise: We only found expensive covers and bad vibes.

My hopes had not been entirely destroyed just yet. Nearby was a Mexican restaurant where seemingly happy people had extremely large margaritas in front of them. The place was called Senior Swanky's. They sat us outside and a jovial waiter came up to us to take our order. He looked at our table and noticed something peculiar about our group. He exclaimed to me: "Look at you man!! You get to be the only guy with all these ladies!"

I looked around at all my friends and thought about how to handle this. Were they embarassed for me? Was this super awkward? Probably, but it was my birthday and I wanted to be entertained. "It's true!!" I said. "I'm such a lucky guy!!" I jumped up and put my arm around him. I urged my friends to take a picture of us.

Then it started to rain and that concluded the night. People begged off and I probably cried some margarita tears on the subway ride home. 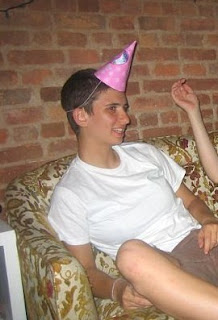 Posted by Served Cold at 7:48 AM No comments:

I would really like to make it socially acceptable for me to loudly announce when I see other gay people. I want to take a bullhorn and proclaim, for all people to know, that I have located another queer and that we may or may not have made eye contact.

Instead of being a total lunatic (and more important than that, maintaining my reputation of imperturbable - hahaha), I've invented a system to satisfy this urge: if I'm lucky enough to be holding someones hand, I may squeeze that hand twice to indicate the observation of a gay person. Sometimes I lose my cool and will squeeze a few extra times when I see a couple, especially a young pair of sweethearts who could care less if anyone is watching them love on each other.

I'm super aware that this involves immense amounts of judgment and crude assumptions on my part. I'm sorry if I've squeezed my partners hand in regards to you and you weren't actually the gay. I take that squeeze back and instead give it to the millions of queers who would loved to be visually identified.

I know I'm not the only one who freaks out upon seeing gay people walking and talking in real life. I asked a friend I super respect for some advice on this blog post and she wrote me back confirming that I'm not alone in this: "Actually I also want to hug basically every lesbian and queer person I ever see on the streets."

I love those moments when I'm walking on those streets, holding hands with some fine girl and I get a look or smile or nod or wink from a stranger. Those signals could mean a million different things: "I'm happy that you found a partner" "I also hit for the other team" "I think you should leave that person and come with me" "My daughter slumps her shoulders to hide her breasts too." I call those signals The Knowing Look. I gave it a name because I cherish The Knowing Look. I try extra hard to make eye contact with strangers just for this look.

Recently, I've started squeezing my own hand. Two light pumps as a reminder to myself that I am not the only queer in this world.
Posted by Served Cold at 2:34 PM 6 comments: