This show is a dream come true:

Posted by Served Cold at 6:34 AM No comments:

Buttons on the Right Side

Before I was fully comfortable with my butchness (butchhood? butchdom?), I had a special "interview outfit" that I kept in the back of my closet for when I needed to femme-it-up for job interviews. This outfit was composed of a button-up that had severe side darts and a collar that was over-sized, slacks that were slightly bell-bottomed but tight around the butt, and dress shoes with some low-key frills decorating the tops and sides. It was ugly and ill-fitting because it was designed by a butch, for a butch, who wanted to appear femme, but still feel butch.

And of course it didn't work. It made me feel sad to wear this outfit and it adhered an extra layer of discomfort to the already challenging interview process. I imagine that I looked like a fraudulent, pre-maturely defeated, over-dressed teenager. But my logic was that I would get a job as a butch in disguise and then gradually de-femme myself. And at the point in which my bosses and co-workers discovered they had unknowingly hired a butch it would be TOO LATE. I would've already stolen their hearts with my strong work ethic and threat of discrimination lawsuit.

But all that mess is over. I have a job and I got it with all my butch parts unhidden. I finally realized that I was applying to jobs with liberal folks that considered gender-nonconformity as weird but not unhireable.  My boss hasn't said one sour word about the way I dress. And recently he paid for his progressive acceptance.

The building I work in is famous. It's like a celebrity, which is a waste because no building can appreciate superstar privileges. On this day, I was taking some relatives up to the top of my famous building to enjoy the view. In exchange for the view, they brought me a half dozen cupcakes that were decorated by the kids in the family. They were adorable and delicious, and I decided to share them with my boss who was stationed in the conference room with a client. I thought: "This'll be so cute, the client will totally think that we have a tight-knit office relationship where we all share treats and spend our free time together." My boss doesn't eat sugar and we don't even have a Christmas party in the office.

I didn't care. I sauntered in to the conference room and interrupted conversations of capital gains and audit preparations. I offered the ugly/adorable cupcakes. My boss asked if his client had met me before. The client said with sudden recognition: "Oh! Is this your son?"

My boss struggled to come up with a response that didn't embarrass his client but would clarify the situation. Before he could get there, I said: "No, I'm just an accountant here. Sure you don't want a cupcake?" They shook their heads and I quickly left the room.

Look, I'm still not gonna wear an ugly dress-suit to work just so my boss doesn't have to deal with these kinds of situations. 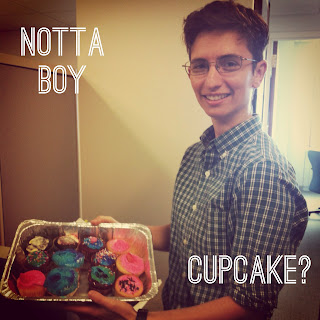 Here's a new story from Kate!

I work for dockers. Well, I work for an ad agency who gets hired by dockers to shoot things and make things and write things. And so we did this print shoot for them, and we were holding auditions where we had to have handsome men come in, get videotaped in these different khaki pants, not khaki colored but like “cool khakis.”

So we held this casting call by my work, so I walked there, later than my coworkers because I’d had car trouble that morning. And at the studio, there was a check-in at the front desk for all of the handsome men arriving, manned (or womanned) by the most green (perhaps an intern) worker in the building. She was flustered when nearly every handsome man approached.

I was late, and I rushed into the building. Nobody looked up, except for the nervous intern with the clipboard. “Models need to sign in here.”

“First off. I’m not a man. Secondly, where is my agency?” 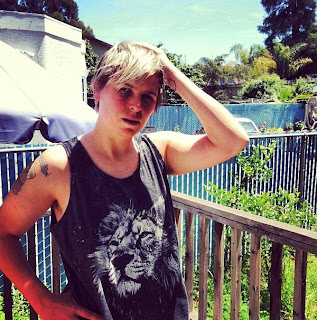 Posted by Served Cold at 7:03 AM No comments: