Another stranger than fiction, real-life, true story of mistaken gender-identity from Becky:

Despite the incredibly high number of times I have been mistaken for a ‘dude’, this is only the second time I have received an apology freebie. I ventured to a burlesque bar last night for a friend’s birthday party, feeling pretty confident that the bouncer would show me in with a gentle nod. (Queers frequent the burlesques, right? Well, what would prove to be my overconfidence was certainly cradled in this assumption…). Sans bouncer I headed to the bar. 'Can I get some water and a Stella?' (‘Twas a rough ride from Crown Heights to the LES...).

He asked for my ID. Over it went. I did the glance around the room for ten seconds thing.

Silence. Exchange of glances (his a good deal southward of my eyes…)

“Oh fuck. Shit your hair is short. Listen, your beer's on me tonight. But goddamn your hair is fucking short.”

I still tipped. Pissed but pleased at the night's budget increase. 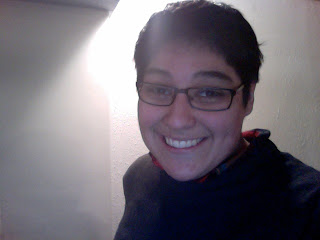 Posted by Served Cold at 7:13 AM No comments:

Parts of Me That Matter

I think the idea to visit every borough of NYC in one day has been over 4 years in the making. Which is kind of surprising, because my friend Rickard and I are really not known as procrastinators. We are pretty good at making things happen, even if it's just to be done with them. Check it off the list. Earn our bragging rights. Obtain our badges. Etc.


Rickard came to NYC from Boston this past weekend. It was kind of a last-minute visit, so we didn't make any plans and on Saturday morning we found ourselves staring at google, wondering what to do. I thought the day might turn into one of those trips where you just kind of go from one restaurant to another, eating your way through the city. Not an adventure, but still fulfilling.

But before we could pick our first restaurant, Rickard turns to me and says: "Should we do our 5 borough tour?"

As we were rushing out of the house, I grabbed a fake severed arm that I had bought for a Halloween outfit and stuffed it in my bag with the fingers sticking out. We wanted something weird to include in each photo we took as we documented our 5 Borough Tour.

Since Staten Island seemed the most laborious to get to, we immediately set out towards the ferry. As we sat on the subway train, we got down to business: how would we create a situation in which I could write a story for my He's A Lady blog. It would just be so perfect to be able to post about the 5 Borough Tour and how we got mistaken for 12 year old boys.

A few minutes after we discussed this, about ten 12 year olds walked on the train. We continued to catch up about our lives, when Rickard nudged me:

"I think those kids are confused by us."

I looked over and sure enough the kids were pointing and whispering about us. The girls went to the boys on the other side of the bench and made them come over and look at us. It was too good to be true. Maybe they would come up to us and we could discuss gender identity. Maybe they would say something outrageously cute and simple for me to quote. Maybe the possibilities were endless.

And then suddenly we noticed that they weren't exactly pointing at us, but at my bag sitting by my feet. My bag, with the fake severed arm, with the fingers sticking out ever so slightly. What was happening had nothing at all to do with our gender, they probably hadn't even looked at the owners of the severed arm. We laughed a bit at our foolishness and then decided to pretend like we were upset that the fingers were showing. Rickard put her jacket over my bag.

We reached the ferry stop, and as we left the train we heard one of the girls say: 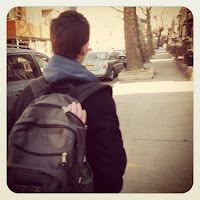 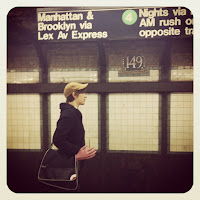 Posted by Served Cold at 7:56 AM No comments:

Typical Things You Learn At A Museum

Wow, I truly apologize for my blog absence, but life has been busy and genderconfusion pretty slow.

Luckily, after prodding my friend for a story, I got this bundle of joy:

Heading for the galleries, I turned around to hear a tiny little voice coming from the wriggling bunch:

“Are you a boy or a girl?” (I'd just introduced myself as Becky)

“But you have a boy haircut!”

“Well I'm a girl and I have short hair because that's how I like it but sometimes that confuses people.”

“My name is Michaela and I'm a girl because I have short hair!” she said pulling at two of her tiny braids. (Note the ‘because’!)

“See! We all have different hairstyles today and when you grow up you can choose your hairstyle like I did.”

A round of other voices chimed in sharing their hair length/color/type.

Now, despite the fact that they were barely 4 years old and seemingly confused about their current environment, their overzealous teacher wanted me to introduce new vocab words: galleries, exhibitions, visitors, and educator.  Educator seemed simple enough…I had just introduced myself as Becky, their educator for the day. After a visit at each object their teacher would prompt, "And what is Becky’s job here?" Blank stares. "She is an Ed...?" One adorable smartie pants remembered it sounded like gator. The teacher pushed, "Educator! Let's repeat it"

We moved on to the last object where I told a story and thanked them for joining me at the museum. The teacher prompted one last time, "and Becky is a...?"

The smiling, wriggling bunch chanted back in unison "GIRL!"

With that four letter word they caused the parent chaperones to laugh, their teacher to stutter and blush, but I was brought to my knees...well figuratively since we were all sitting 'cris-cross applesauce'. With a huge smile and just a couple of appreciative tears, I answered "That's right, and an educator."

After four vocab words, three art objects, two galleries, and one story about the Hindu god Ganesh, they couldn't recall educator BUT they knew I was a girl! Now that's quality education. 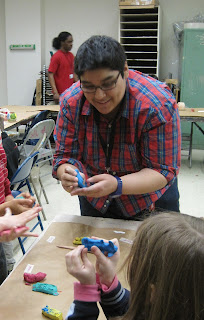