This story comes from Rickard:

My "he's a lady" experiences are usually pretty ordinary: awkward bathroom confrontations, being called 'sir' in front of my boss and my grandmother. But my favorite was the time I got "she's a dude"-ed.

My girlfriend and I were out at a bar with a guy friend of ours, when we were approached by a Navy bro in his dress blues and a nametag. He was no Maverick, but he did his best to be smooth. He looked me and Sarah up and down, and gestured back and forth between us, asking me, "Can I get in on this?"

I paused, looked him up and down, and said, "Well, we actually have a rule about that." His eyes lit up. "You'd have to take it." His smile turned to confusion. "From behind."

His face fell, and he shook his head, saying, "Oh, I can't do that." He started to walk back to his buddies, but then turned around, grabbed me on the shoulder in this heartbreakingly earnest way, and said, "Dude, I'm so sorry. I thought you were a chick." 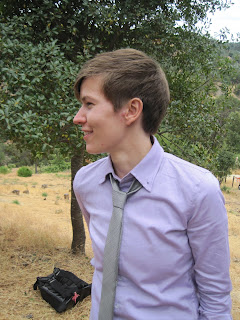 There was a moment where I had some money and I decided to use it to travel to South America.

The people in foreign countries have about the same track-record for determining my gender as they do in the U.S., but the difference is that I usually don't have the language to defend myself abroad. Maybe I don't even know how much it happens because I don't understand what people are saying around me, but I think I've gotten pretty good at discerning whether the whispers and stares are "strange-looking-foreigner" or "strange-gendered-human."

When I'm abroad, I'm already kinda freaky by virtue of wearing a ball-cap, holding my Lonely Planet, being white, talking in another language, asking for directions every fifth block, etc etc. It seems like women in bathrooms tend to ignore the fact that I look like pictures of their exchange student's younger brother. On the other hand, sometimes it means I decide to sit with the men at the orthodox Jewish temple in Rome, since explaining in whispered Italian during intense services that "I'm not a dude" to a bunch of really religious woman sounds like more trouble than it's worth.

I went to Argentina and Bolivia this winter. Not that it probably matters to you, but I had an incredible time. Maybe it's because they are one of the gayest travel destinations in the world, but I really had no big gendered mishaps in Argentina. It's certainly not because their are a lot of butch people there, I saw maybe two (yes, I WILL be the judge of their gender identities) at a gay club and they had long hair and tight shirts emphasizing their chest.

Bolivia was kind of a different story. There was less "Señorita", more "Señor". The men I met avoided kissing me on the cheek because men don't kiss men when they are introduced. Learned that the hard way.

I found out how confused people must of been when I was shopping in Cochabamba. I was in an antiques shop, trying out my infantile Spanish when the shopkeeper's 8 year old son came up to me and we had this conversation (in Spanish):

Shopkeepers Son: Are you a boy or a girl?

Me: What do you think?

Shopkeepers Son: Because you have short hair.

Shopkeepers Son: (pointing to my nose area) And booger!

So, booger? I quickly make sure my nose isn't snotting all over the antiques. But I didn't feel anything there. Is this kid totally messing with me? Why does he use the English word for booger when he's been speaking in Spanish the rest of the time? Why isn't he discreetly informing me of my snot? I leave in a hurry (way to cost your mom that sale, little boy) and decide that I should go find out if there's a word in Spanish that sounds like booger. I find Andie, the girl-of-my-dreams/travelling companion who speaks fluent Spanish and when I tell her the story and ask her what this little man could've been saying, she starts laughing and says:

Bigote is the word for moustache. 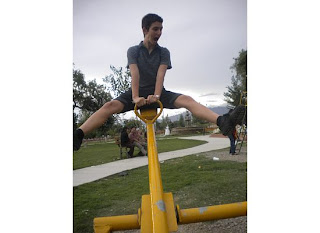 I've been graced with another guest blogger! This story is from Ayla:

A few years ago my ex-gf and I were walking hand-in-hand into the 1st Ave subway station. I'm femme, she's butch, and we're both really blond. In short, we were the cutest lesbian couple ever. Our relationship was pretty much based on our awareness of this fact. We were one of those brother-sister looking pairs and strangers used to come up and tell us how cute we looked together. We spent roughly half our time posing for photobooth pictures on my laptop or doing arm-outstretched-cellphone (ie Myspace-pose) portraits together. This is us at the height of our ill-fated romance: 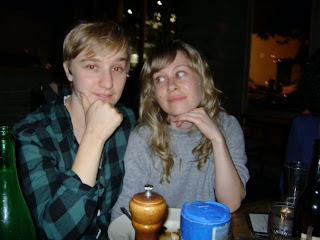 Anywho, as we enter the subway station we see a very intoxicated homeless man walking in our direction. He fixes eyes on us, and gives me a VERY exaggerated googly eyed once-over. He lets out a little whistle and then starts to say to my ex-gf, "Dammmmmn boy, you a lucky ma..." and then stops dead is his tracks. He does one of those stunned/confused cartoon character blinks in front of us, and just says, "OH! Two ladies! ... You have a good night, ladies," and keeps walking. It was by far the most good-natured and strangely polite, "turns out he's a lady" experience I've seen.
Posted by Served Cold at 1:28 PM 2 comments:

My first guest blog post by my dear friend Ali:

When I got engaged last year, one of the first things that came to mind when I started thinking about the wedding was that I HAD to have my friend Lauren play her guitar and sing a song. She's got an awesome voice, great taste, and she's one of my best friends.

Fast forward... The wedding was great, Lauren's song was beautiful. Our most distinguished guest was my husband's 90-year old grandpa, who made the trek to Northern California from Florida. Now, Grandpa's an interesting guy. First off, he's huge. Secondly, he has an intense southern accent... think Foghorn Leghorn, but giant. And really old. Did I mention he's 90?? And Southern?? When we called Grandpa to ask what the highlights of the wedding were for him, he said "Well, I started talking to this guitar playin' fella... TURNS OUT, HE'S A LADY!" 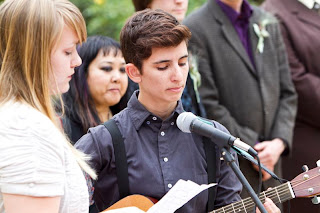 When Zombies Only Attack Women

I think it's super fun to mess with and question the newly forming perceptions of gender that children are developing. I've learned that despite their short time on this earth, they have extremely strict ideas about what a man looks like and what a woman looks like.


Most stories about children and my gender are a boring story like this:


And then they either they are totally freaked out and walk away or they venture a guess. Usually girl. Because actualllllllly, they do know my gender, they just are confused by my aesthetic choices.


Anyhow, this my favorite child confusion story. It happened when I was at a big marching band festival in Boston, Massachusettes called Honk! I was there with the radical marching band I play sax with and a kid (Oscar) of one of the low brass players was there with us. Some people enjoy entertaining Oscar and got him into pretending he was a Zombie. Our interaction went like this:

Me: I'm so scared, don't eat my brains! (Ugh, I never know how to play with kids)

Oscar: But don't worry, I only eat girl brains!

And that's how I still have my brains today. Look how happy I am about that.

First post! Here's a blog dedicated to all the times I'm mistaken for a 15 year old boy, or a man, or a dude, or a boychildmandude. And this is blog material, because I'm really a woman in my late twenties who happens to just look far better in clothing made for men. For example:

Was in Duane Reade today trying to buy my expensive Herbal Mist White Tea with Yerba Mate. Went to the counter to purchase said drink and all three sales representatives were helping a highly agitated woman. The woman looks over at me and says to the sales reps: "I think that kid wants to buy a drink."
Posted by Served Cold at 11:04 AM 1 comment: